Art talks. Art is a vehicle for discussion of and reaction to other arts. For example, Richard Prince, in 1977, sparked a conversation about the role of photography in art by rephotographing a famous photograph. By itself, the photo just looks like an imitation - but art history provides a much bigger context around the way Prince's piece Untitled (Cowboy) served as a critique on what makes a photograph different from the thing being photographed (FYI, Time lists the imitation as one of the Top 100 Most Influential Images of All Time). By itself, the art looks like nothing more than a cheap ripoff - but it's the conversation the artist - and the art piece - is having that is important.

One of my favorite books is The Last Avant Garde: The Making of the New York School of Poets. This book is about a movement in poetry epitomized by five poets: John Ashbury, Barbara Guest, Frank O'Hara, James Schuyler, Kenneth Koch. The interesting aspect of this book is how each poet influenced the others. In fact, their entire collective moment is a response to the New York School, which originally focused more on other arts like painting. Again, the emphasis isn't just on the art, but the conversation surrounded by and generated by the art and artists.

Art doesn't happen in a vacuum. Henry David Thoreau's work in forested isolation is the exception, not the norm. Artists talk with other artists, and art talks with other art.

Last week that conversation happened in simultaneously grand and small scales: Tableau Conference 2018 took place in the wonderfully eccentric city of New Orleans. It was my first Tableau Conference, and I was delightfully surprised at every turn - hands down, this was the single most valuable week of my professional (and probably personal) development.

Through the presentations I enjoyed and the personal interactions I had, my mind kept coming back to the poets talking about poetry in The Last Avant Garde. My casual conversations and discussions over work brought to mind some of the archived correspondence between Elizabeth Bishop and Robert Lowell. Listening to critiques of dashboards on Tableau Public felt like reading a letter from Hemingway to Fitzgerald, both aggressive and inspirational, both harsh and hopeful.

Artists talking about our craft

There were a ton of presentations on data visualization as an artistic craft (warning - a paragraph full of hyperlinks that you should definitely click on). Mike Cisneros inspired and encouraged artists to get started and recognize their craft as art. Neil Richard's presentation highlighted alternative paths to design. Lilach Manheim provided us with a new paradigm for our work, including a sort of process oriented model toward design. Even the more technical presentations, like this one by Matt Chambers and Ken Flerlage, can be considered artists sharing different artistic techniques. And, of course, artists are known for stepping into conversations about ethics and morals - which we saw in a brilliant, motivating presentation by Bridget Cogley.

But even beyond presentations, there were also a ton of small conversations happening. I posted the following topic in the conference's "Braindate" application, which helped connect people with common interests for a brief conversation during the conference.

As a result of this post, I met a ton of new people - writers, literature students, and even someone who used to work as an analyst for a record label. In addition, I responded to a Braindate topic from Nai Louza, who is also interested in fleshing out poetry as a paradigm in data visualization. Our conversation still has me reevaluating my perspectives on data visualization as a craft.

All of these had something in common: they were conversations between artists about art. They weren't always about data visualization either - sometimes, like the New York School of Poets, we were responding to other forms of art as inspiration for our own, and as new ways to think about our work. But all of these are reinforcement for the idea that last week, thousands of artists working in very different roles came together to discuss art.

Much like artists are prone to do, Lindsay Betzendahl reflected on last week by making art - specifically, a poem. Read her beautiful words below, and notice how she used artistic techniques to talk about the abstract ideas of our craft:

She sent me her work through a private message on Twitter - and it felt very much like one of the New York School of poets sending a piece of one of the other poets for a response before publishing. And, reading her work, I was inspired to also reflect on the week through poetry - and I drew on inspiration from Lilach Manheim. Here are my words: 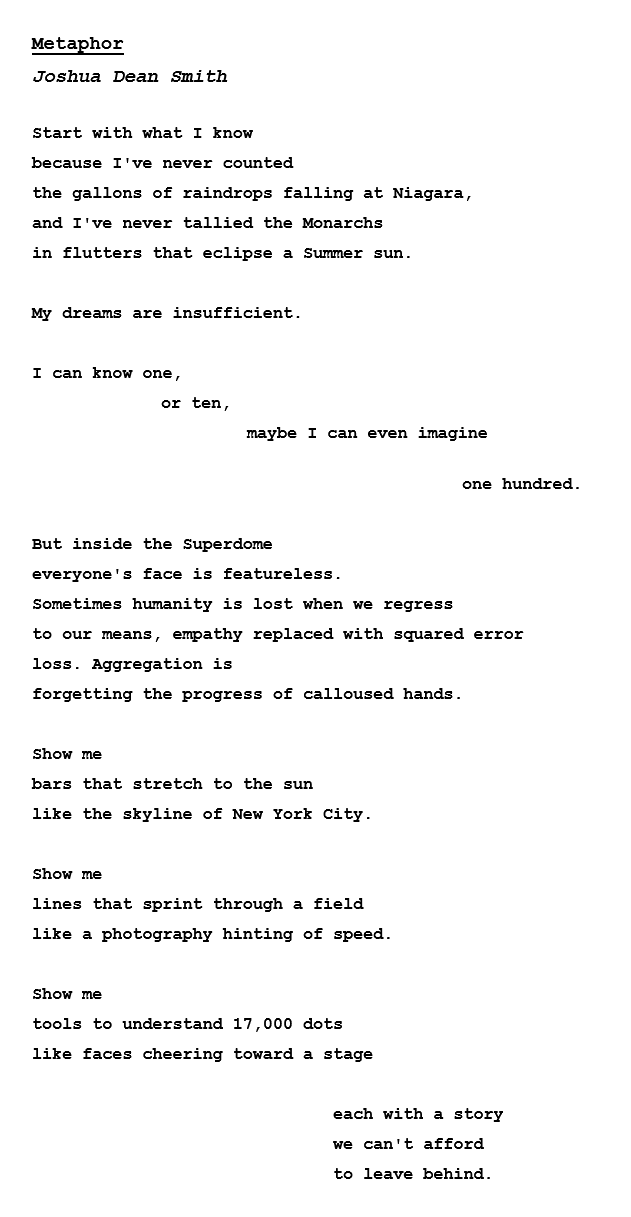 This was the most inspiring thing about the Tableau Conference. I've been working in the data viz craft for nearly five years now, and I've thought of this craft as an art form for some time. But I've only recently become part of the Tableau community, and now it feels like I - and my art - have others to talk with. It feels like my work has context - and my work is better for it. Paradoxically, becoming a part of a very large community has given me, as one very small contributor, more voice.

The community I am now part of feels like the New York School of Poets - except instead of 5 of us sitting around a coffee table, there's 17,000 of us, and we're overcrowding the Superdome.