When I draw comparisons between different arts and data visualization, I'm often asked "But isn't art subjective? How are we supposed to make 'good' designs when everything is subjective?"

To get to an answer to that, let's check out a short poem: This is just to say, by William Carlos Williams (click here to read along):


Now, here's a moment of honesty: it's more than a little infuriating when I watch this after getting a handful of rejection letters from poetry magazines. I spend months reworking a poem, and Williams here gets a refrigerator note published!

If you aren't in love with this, you aren't alone. In every beginners workshop I ever attended, we all threw up our hands and said "we don't get it".

So what makes this so special - and what does it have to do with data viz?

Many of Williams' contemporaries, particularly T.S. Eliot, were championing rules and a sort of elitism with their more traditional poetry. There were obscure classical references, strictly enforced meters, and the poems were at times a bit lengthy (for a poem). Not exactly approachable for non-poets.

The Williams hits the scene. Williams is a doctor by day, poet by night. He doesn't particularly like rules, and he wants to free poetry from all the technical restrictions. This is just to say is a perfect example of that. No rhyme, no real or consistent meter or rhythm, and no obscure references.

This simplicity is what has drawn many to love this poem. It's so relatable. I don't need to carry around an encyclopedia of Greek references or a dictionary. I don't need to scan the poem for iambic pentameter. I just read it, like I would any note on my refrigerator.

And there lies the connection to data visualization. Relatability.

An easy example: I recently built a Tableau dashboard for our member hospital systems to use. I was proud of my work - it followed solid design principles, had some complicated level of detail calculations, and the data prep behind the scenes was a bit complex. But...it was really just a couple of donut charts and a bunch of bar charts. From a data visualization standpoint, it really wasn't all that atypical.

But the users loved it. In fact, one of them said she was "dancing in her chair from excitement". It was a bit bizarre to me, that something so simple could get someone so excited.

That's kind of like This is just to say. Before this dashboard, the users were forced to interact with complicated, difficult to understand tools - much like a layperson trying to enjoy some of Williams' contemporaries that wrote elitist poetry. On the other hand, my dashboard came out of extensive user research and incorporated lots of feedback from user workshops. Consequently, this dashboard was relatable. It fit them, rather than asking them to fit the dashboard.


So, yeah, art is subjective...and that's the point

I'm a big believer in user-driven design. This isn't just asking users what they want to see - it's bringing them into the design process. Users contribute to the end design by tossing in ideas or even helping me wireframe a dashboard. This ensures the end user can relate to my design, and that the information is meaningful and meaningfully displayed.

To be honest, I'm not a big fan of many of my designs, but my users like them, and that's the point. There's definitely a huge, subjective component to design, and that's why user research and and user experience principles are so important. Addressing the subjectivity will make your users happier with your product.

Not everyone will like all of our designs - just like a number of people don't like This is just to say. Many people think This is just to say is too simple, just like Edward Tufte might look at my dashboards and think they are too simple (one could argue that my dashboards have too low of a data:ink ratio). But, Edward Tufte isn't my user, so I'm not worried about his opinion. My users aren't experts in analytics or data visualization, they are just people that need a few numbers to do their job better - and if they are happy, I'm happy.


The beautiful simplicity of Eva Murray's #MakeoverMonday dashboard, and my own attempt at simplicity and relatability

When I was first looking at getting into #MakeoverMonday, I was a bit overwhelmed. I'm supposed to build an advanced dashboard every week? I don't have time for that.

Then I stumbled onto some of Eva Murray's dashboards, and found some that were incredibly simple. Check out the one below (or on Tableau Public): 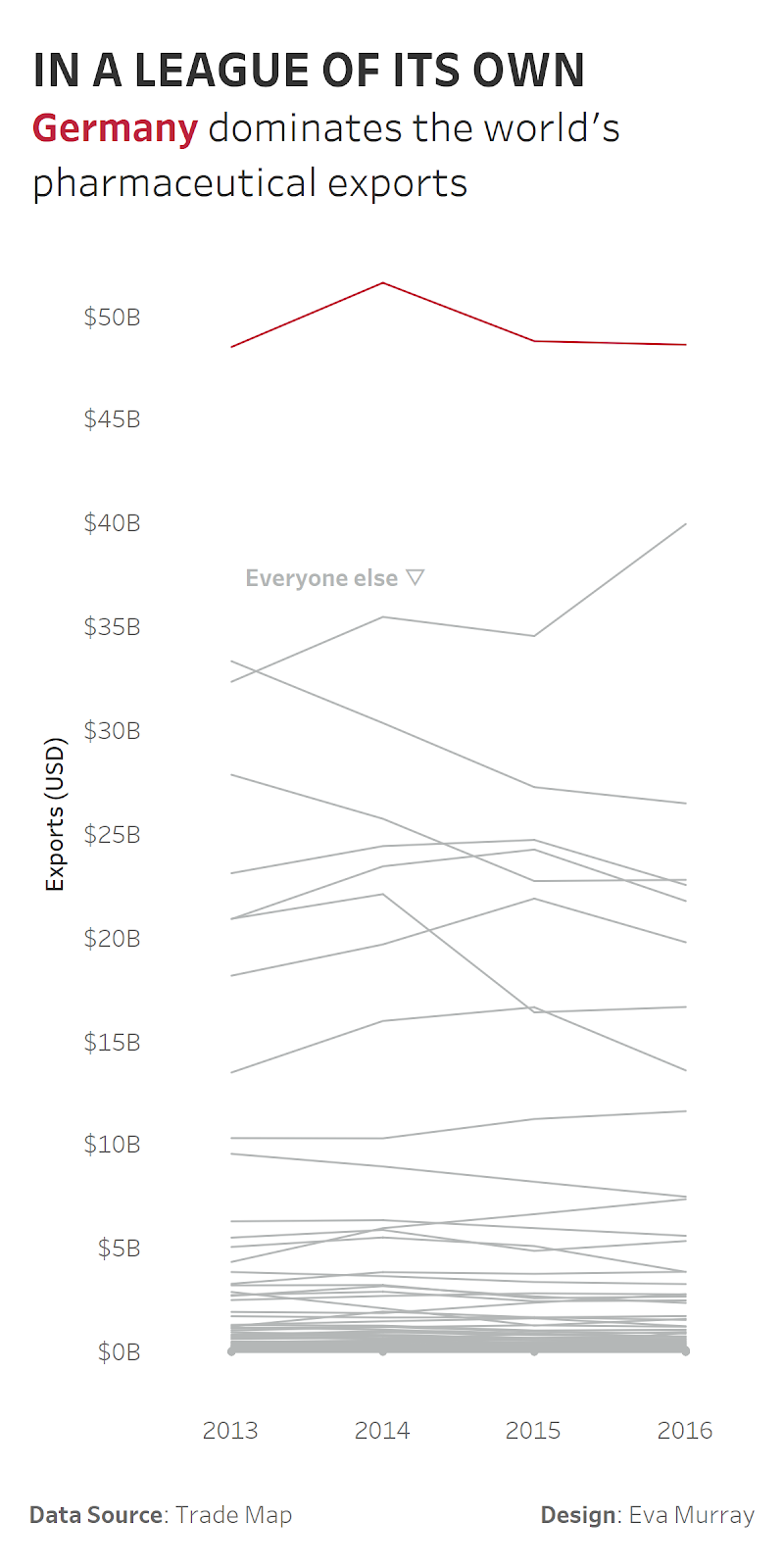 It's so simple! I'm not saying it's too simple. Look how obvious the takeaway is. Her use of a headline and color make it so easy to see the key point. There is brilliance and beauty in the simplicity.

Now, don't for a minute think that Eva Murray can't make more complex dashboards - she also has some unbelievably advanced, wonderful work on her Tableau Public account. But, I absolutely love the simplicity in this - I could relate to it. I didn't have to read a bunch of legends or titles and explore a bunch of different buttons and filters to understand how to interpret the visualization.

And in fact, seeing her create something so powerful with simplicity is what convinced me that I don't need to find the time to build a fancy dashboard with advanced functionality to participate in #MakeoverMonday - all I needed to do was communicate a clear and simple message in a way that's relatable.

The inspiration from her simpler dashboards inspired me to try to describe large numbers in terms of things individuals could understand. The #MakeoverMonday challenge on ecological footprints used some fairly complex metrics that represented large numbers that can be hard to grasp (Lisa Charlotte Rost did a fantastic presentation on empathy and large numbers that you should definitely watch). I decided to convert and divide those metrics to things that we encounter everyday - things like our homes and our neighborhoods. The result is this dashboard on Tableau Public:

So that's been my goal in most of the #MakeoverMonday challenges - simple, concise, refrigerator-note visualizations. They may not be advanced enough for everyone, but I'm ok with that. I enjoy giving what time I have to focus on the simplicity and relatability.
Labels: data data poetry data visualization poetry tableau user experience user research